Have you ever stumbled upon a recipe or a cocktail that was SO unexpectedly good, you rushed around for a sticky note or random receipt back to write it down?

That’s what happened with this Skinny Piña Colada. I was re-creating Princess Cruises Rum infused Piña Colada Chilled Soup when it occurred to me I had ALL the ingredients in front of me to make a traditional Piña Colada, except the Coco Lopez mix.

You know the stuff – Coco Lopez comes in a white squeeze bottle and makes those perfect “day at the beach” blended cocktails with very little effort. Only thing is, it’s LOADED with sugar, and super high in calories, so I rarely buy it.

Anyhow, I digress…where were we? Oh yeah, cooking chilled soup and realized it was cocktail time! You know you’ve done it…cooking is way more fun with a cocktail in hand (and some tunes playing), so I had nothing to lose!

What if I could make a Skinny Piña Colada without the sugary goo? Would it do the trick but lack that island-sweetness that makes a Piña Colada so refreshing?

Hmm….it was risky, but I wasn’t throwing a party or sharing it with anyone, so what the heck. Nothing to lose and either way, I was going to end up with a rum based cocktail. I quickly placed a glass in the freezer to chill, grabbed my blender, and tossed in three ingredients, not counting ice.

I keep bags of frozen pineapple on hand at ALL times for smoothies for my boys. Trader Joe’s sells it (in the freezer section of course), for a very reasonable price, so I usually have a bag or two floating around. It’s finely chopped, and blends nicely, so popped about 1 cup of this into my blender, with about 1/4 cup of crushed ice.

Another pantry staple, coconut milk sold in the can is great to have on hand for curries, smoothies, and even an alternative to coffee creamer. I added just under 1/2 cup to the blender since I didn’t want the piña colada to be runny. And, that’s all I had left after using the rest of it in the recipe for the soup, so it would have to do.

Ooh, how to decide which rum to use? Easy- whatever you have on hand! I had a bottle of Cruzan Aged Rum from St. Croix in my bar cart, so I grabbed that and added about 2 ounces to the blender. Cruzan is a clear, white rum, but this recipe would also be GREAT with a dark or Malibu type rum. *Spoiler, I added a float of Cracken (the strong stuff) later on, but that’s another story.

Usually, it’s hard to nail a recipe the first time, but when it happens, it’s the best feeling! After a few minutes in the blender, the pineapple, ice, rum and coconut milk created the perfect creamy-frosty creation.

“SURELY it won’t taste as good as it looks”, was my first thought.

I grabbed a spoon, took a taste and WOW, the combo was perfect. The flavor was somewhere between the Painkiller I had in Tortola, and freshly blended Piña Colada with a distinctly pineapple-rich flavor. The texture was NOT lacking, and the drink tasted pure. 3 simple ingredients working together perfectly, yet standing out on their own.

This cocktail was no joke. I sipped on it while cooking, and when it started to melt, I popped it in the freezer for a while. Once it hardened up a bit, I added a float of Kraken Black Spiced rum, which extended the cocktail for a good while! If only I’d thought to make TWO!

But nope, I was out of coconut milk, so I’d just have to write this goodness down and make it another day. After dreaming about it for a solid week, I decided to share my piña skinny colada accident in a blog post (it’s that good), in hopes it would bring some island-dreamin’ joy to our readers!

Directions: Blend all ingredients in a blender with crushed ice until creamy. If the cocktail seems runny, add more frozen pineapple and ice. Too thick? Add more coconut milk (or rum!). Service in a frosty glass. Top with whatever you have on hand- lime wedge, pineapple wedge, coconut flakes, or nothing- it’s all fine!

Coconut flakes: I’ll admit. I added a 4th ingredient, but just as garnish! I had some unsweetened coconut flakes on hand, so I couldn’t resist topping it with something pretty. It’s not necessary, but a nice touch for sure!

Lime: One thing I normally add to Piña Colada’s is lime juice. Had I thought of it, I probably would have added it, but the cocktail was perfect without it. Your call!

Berries: I know, berries have NOTHING to do with this type of blended drink, BUT if you don’t have pineapple on hand, or want something less sweet, berries will pair beautifully with the coconut milk and rum! Just add a swirl of honey or agave nectar if you find it lacks sweetness.

Mango: No pineapple on hand? No problem. Frozen mango will yield the same creamy-tropical-sweetness and you won’t be sorry.

Banana: As with the mango, bananas will do if you have frozen ones on hand. They blend beautifully and add richness! Add a little dash of nutmeg, and you’re in the islands!

Coconut Water: If you want to lighten this recipe up even more, coconut water could be a good sub. It will result in a much less creamy end (but refreshing) result.

Pineapple Juice: I’ve seen this ingredient used in other Skinny Piña Colada recipes, and while the fruity flavor is a bit too much for me, it’s a great sub.

Rum Float: Do I even have to explain this one? Go for it!

Listen To Our Podcast.

Did you know we have a podcast? Yep, we’re coming to your earbuds every Wednesday at 6am Pacific Time, wherever you listen to podcasts. If you’d like to hear us talk more about first time cruise tips, catch our podcast on the subject.

Learn the time and money saving secrets seasoned cruisers use to keep their cruise vacations on course. We’ve built an incredible training resource called the Intro to Cruising Master Class. When you enroll, you get instant access to 20 cruise prep videos and packing and planning checklists. Use Code ALLABOARD for $5.00 off the course.

Contact Our travel agency partner, Montebello Dream Vacations: Let Wendy know you were referred by CruiseTipsTV when you call. Wendy will match you with the best agent for your needs, and an agent will give you a call back! Phone number is on the website.

Check out our live Cooking Guy’s Burgers episode where we tackle cooking up some the best burgers available on the high seas. There’s lot of terrific food on Carnival Cruises, and when Carnival teamed up with Food Network personality Guy Fieri, they took their pool-side food game to the next level. We always look forward to a delicious Guy’s Burger on Carnival. Since we can’t cruise right now, we decided to try the next best thing, and we did it live! 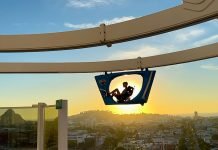 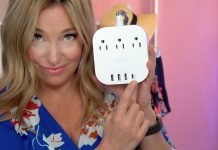 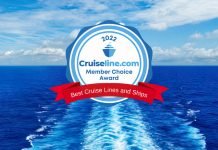 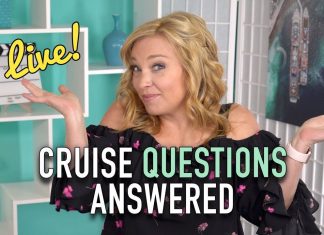 How We Organize Our Harmony of the Seas Cabin