SEATTLE, Jan. 27, 2022 /PRNewswire/ — Holland America Line‘s newest ship Rotterdam is set to get the royal treatment at a naming ceremony in Rotterdam, the Netherlands, May 30, 2022. Her Royal Highness Princess Margriet of the Netherlands will be the ship’s godmother, carrying on a Dutch royal tradition that began in the 1920s.

New ship Rotterdam to be named May 30 in Netherlands by Her Royal Highness Princess Margriet of the Netherlands.

“Our new Rotterdam is a spectacular ship, and we are thrilled to have its naming ceremony scheduled with a celebratory cruise that allows our guests to join the festivities and officially welcome her to the fleet,” said Gus Antorcha, president of Holland America Line. “Our history is deeply rooted in the Netherlands, and it was only fitting to name our newest Rotterdam in the city of Rotterdam with a royal godmother to honor our Dutch roots. We are deeply grateful that Her Royal Highness Princess Margriet will once again act as godmother to a Holland America Line ship.”

When the ship arrives at Rotterdam May 30, a private ceremony will be held for invited guests that will be broadcast throughout the ship. During the voyage, guests will enjoy special events exclusive to the naming sailing, including a celebratory Gala Dinner and an opportunity to participate in the blessing of the ship’s bell, along with surprises and commemorative gifts.

Once the ship departs Rotterdam, guests will spend the remainder of the voyage exploring the ports of Kristiansand, Stavanger and the stunning fjords and charming villages of Norway. A highlight of the itinerary is a day of scenic cruising in Sognefjord. The largest and deepest fjord in Norway, the “King of the Fjords” is one of the world’s most beautiful destinations lined with majestic mountains and lush landscapes. In Flåm, the famous railway offers an unforgettable experience, climbing from sea level to 2,800 feet, crossing back and forth over rivers and passing through 20 tunnels.

Book the ‘Rotterdam Naming Celebration’ Cruise with Have It All
Travelers who want to be a part of the festivities can book Rotterdam‘s naming voyage and join in the celebrations. For guests who appreciate taking an inclusive vacation with extra amenities factored upfront into the price, Holland America Line’s “Have It All” premium package includes shore excursions, beverages, specialty dining and Wi-Fi in one base cruise fare.

“Have It All” guests on this cruise will receive one shore excursion up to $100 value or $100 off any one tour; a Signature Beverage Package that includes up to 15 drinks per day; one night specialty dining in Pinnacle Grill, Tamarind or Canaletto; and a Wi-Fi package.

“Have it All” fares for the “Rotterdam Naming Celebration” cruise begin at $1,749 per person, single occupancy. Taxes, fees and port expenses are additional. Cruise-only fares begin at $1,399 per person.

A Long Royal Relationship
Holland America Line’s connection to The House of Orange goes back nearly a century to Prince Hendrik launching Statendam III in 1929. Since then, members of the Dutch Royal Family have launched 11 more Holland America Line vessels throughout the years, including Her Royal Highness Princess Margriet who named Prinsendam (1972), Nieuw Amsterdam III (1983), Rotterdam VI (1997) and Oosterdam (2003).

Additional members of the Dutch Royal Family who are godmothers include Queen Máxima, who named Koningsdam in 2016 and Nieuw Amsterdam in 2010. Then-Queen Beatrix served as Eurodam‘s godmother in 2008. Rotterdam V was launched in 1958 by Queen Juliana. Then-Princess Beatrix named Statendam IV in 1957 and Prinses Margriet in 1960. Nieuw Amsterdam II was launched by Queen Wilhelmina in 1937.

Rotterdam was delivered by the Fincantieri shipyard in Italy July 30, 2021, and sailed a transatlantic first voyage before spending the fall and winter on its inaugural Caribbean season sailing roundtrip from Fort Lauderdale, Florida. Beginning in May, the ship will explore Europe, heading to Norway, the Baltic, British Isles and Iceland, all sailing roundtrip from Amsterdam.

About Holland America Line [a division of Carnival Corporation and plc (NYSE: CCL and CUK)]
Holland America Line has been exploring the world since 1873 and was the first cruise line to offer adventures to Alaska and the Yukon nearly 75 years ago. Its fleet of premium ships visits nearly 400 ports in 114 countries around the world, offering an ideal mid-sized ship experience. A third Pinnacle-class ship, Rotterdam, joined the fleet in July 2021. 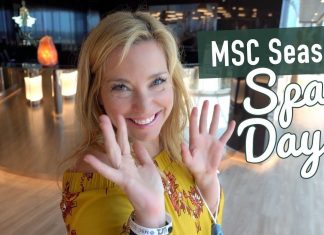 September 13, 2018
We check out the spa on this MSC Seaside Caribbean Cruise vlog Hi Cruisers, It's time to take things a little easier on our MSC...